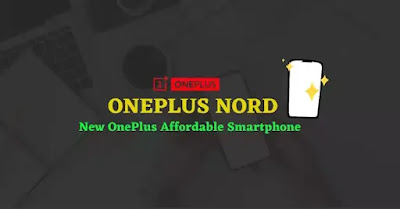 The OnePlus Nord  is officialy confirmed by OnePlus . After many months of Rumors & Speculations . OnePlus confirmed the name of much-teased upcoming affordable(Budget) phone .
OnePlus has also revealed the price of OnePlus Nord below 500 dollars .
The Headset first rumored as OnePlus 8 lite or OnePlus Z . In Latest Statement Oneplus  said that Nord is an new product of a company in waiting line . which is listed in OnePlus Budget range or affordale  handsets which the company confirmed is on its way with a teased name OnePlus Nord
OnePlus Founder and CEO pete lau confirmed that the OnePlus Nord is first available in Europe and India . In North America it released in beta sessions it is not fully clear the beta programs in US or how much pieces is available for beta program .
OnePlus also Confirmed that of their Official Instagram handle

What will the OnePlus Nord Offer ?

This is the first time after OnePlus X 2015 Launch That OnePlus Affordable Headset alongside its flagship range .
OnePlus not revealing any further informations on the OnePlus Nord for now we only about the name of the new headset but all the leaks hinted the expected features .

According to the Recent Rumors , OnePlus Nord is coming with a Dual Front Facing Cameras (32+8MP) . In the corner of the screen with a punchhole cutout it comes with Qualcomm Snapdragon 865 G Chipset , 6 GB of Ram , 6.65  Inch-Screen with three Rear Cameras .

OnePlus Nord Priced is Teased below $500 . below 500 dollars is a good budget range price offering from OnePlus .
That all with todays news i hope you guys like it .if you really thinks my content is share worthy than please share your one share motivate me to make a quality content and must read our last articles where we discuss about Network Marketing , Adsense Alternatives or Free Web hostings & Domains . Follow our blog to get updated with latest news , reviews , tech informations .
THANKS !

I am Avi Arora (Founder TechRedefineed) Your Tech Partner Here We Share Lots of Knowledge(Technology & Tutorials) with our Audience. Join Us & Be a Part of our Family